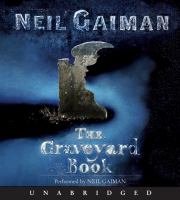 In this 2009 Newberry Award winner, Nobody Owens has lived in the cemetery at the top of the hill since the night his family was murdered and a pair of ghosts took him in. Encountering vampires, specters, ghouls, werewolves, etc. on a daily basis, young Nobody ('Bod' for short) has the freedom of the graveyard, something accorded very rarely to living people. He has learned to fade, dream-walk, generate fear, and haunt as well as any living person can under the tutelage of the hundreds of ghosts living in his graveyard. As Nobody grows older, he seeks to find out why his parents and older sister were killed, and who exactly it was that killed them. To do this, he must leave the safety of the graveyard and face the danger that lies in wait for him out in the real world.

Set in a unique setting, told in a fresh way (Neil Gaiman himself narrates the audiobook) with a fascinating cast of characters, this book is an engaging hallmark of story-telling that is difficult to put down.